THE PAINTINGS OF GREG KWIATEK

What do we see?

A painted moon, like a glowing thumbprint sequestered high atop a patchy night sky. Ever so subtle and unobtrusive in its placement and smoldering shine, but clearly feeling for what it observes and holds in its grasp- for that which lies outside of the landscape we can see. The clouds below move in funereal recumbent aspect, and are hardly decipherable save for the bits of light at their edges, and the deeper blue-black sky behind.

To the left, a wide vertical wash of darkness, like a curtain being drawn across the entire scene.

Is this theater? Yes, of a certain kind.

A grotesque group of figures reminiscent of devils, seaweed creatures, and space aliens. Sharply drawn and painted, flesh and bone turned inside out, but all rendered so elegantly with a tremendous noblesse oblige. They remind us that they have been here before, and that they belong. Familiar to us in appearance, they are types: archetypes, stereotypes, biotypes. Artifacts in gold, attendant at some kind of brutal, ceremonial gathering. They are part of a repeated mythology in the work of Greg Kwiatek, like an ugly but factually necessary point in a demanding argument. Yes, they have been here for a while, and though we may not want to acknowledge them, they are here to stay.

A triptych: three paintings pushed together made up of rolling "atmospheric light" or fog. Like looking at the components of melting glacial water through a kaleidoscope, trapped archaic minerals from volcanic bedrock, suddenly expanded and enlarged to a hundred times their size. The floating globules are caught in a spreading, hazy cloud: ancient stuff, earthly minerals. On the other hand, they are a sweetened, sickly bunch. The fleshy bits of Rubenesque children against a cerulean sky, a contagious, blistering rash over skin and earth.

One can't help but think of oppositions: cotton candy and atomic bombs. Skittles and cyanide. Sugar and salt, to be a little less dramatic. Though in Kwiatek's painting narrative, the drama is powerfully subverted, and never mislaid.

Another painting: El Greco remembered through a silty, palpable circling of waves and contour. This moon, a powerfully quiet force controlling the miasma which surrounds. Cloaks of fabric become swirls of light become praying forms, nearly spiritual. Haunting and haunted, they circle the moon, and are drawn exquisitely to beautiful effect, leaving us reeling, gasping in their wake. The gesture of the hand is clearly seen and has molded the clouds like clay. We feel their texture, the silk, heavy, velvety material of the sky's folds, like the draping of a cardinal's long robe.

Faceless portraits, moons, war-torn creatures, seascapes, photos of seaweed on the beach, and now more recently, newer, absolutely fascinating works made by an old-fashioned, old-lady traditional process: needlepoint. In his large body of work, Kwiatek has created an aria of visual song, gesture, brushstroke, line, and an antipodal narrative which stretches our consciousness to obscure, vital dimensions.

But how shall we define this work? From what origins does it evolve?

To what group of artists or era does Kwiatek belong? And why do we feel the need to classify his work at all? His ability to make us feel terribly uncomfortable by defying classification is refreshing, and like few other artists of his generation, Kwiatek has made a difference in the way we experience and think about painting - he sustains it, transforming and subverting a genre that was all but ignored for the last post-post modernity. Breathtakingly beautiful paintings of moon, and air and light. Horrific, darker portraits of a race not quite human. Kwiatek challenges us, teases out our most vulnerable selves with his often nuanced, but sometimes brutal gestures in color and form which follow a mythology often repeated.

The raw sensitivity of his work creates an oppositional balance in his studies of light and darkness. Think, a film of grease over a hazy blue sea. Or just, a hazy blue sea- his gouache studies from his summer house in Maine. A moon, full and white, grounding an otherwise lost and brooding night sky. His monster-like, anthropomorphic figures, hardened and striking, appear to be formed of bone and tissue. But they also bring to mind some kind of fragile, crumpled paper such as rice or Joss paper, the Asian funeral paper painted in metallic golds and silvers which are burnt as offerings for the afterlife of the dead. These strange, hideous figures already burn and glow in reverence in these paintings, perhaps alluding to a myth that needs to be told again and again- the story of the human condition. How fortunate we are that Kwiatek is here to tell it. We are happy to be a part of his mythology.

Let's try to put ourselves in his head. He is this Tolstoyesque character

(yes, Levin from Anna Karenina - I am happy to make the comparison again) who feels most at home in nature, and is a fragile beast among

the civilized. For years, he walked through the European Paintings section at the Metropolitan Museum of Art as a night guard, accompanied by Tintoretto, Bassano, El Greco, Velazquez, Canaletto, Guardi, and Courbet, not to mention Monet and Cezanne. Not bad company for a solitary creature of habit like Kwiatek. No one there to bother him, to distract. He understood that the paintings were asking him to look closely,

to really observe, to get under their skin, while at the same time, they crawled under his.

They revealed themselves in his gouaches of the moon and sea scapes where the horizon line subtly divides light from dark, and in his paintings such as Portrait of Little Girl After Velazquez from 2010. The bust of a mostly faceless girl with a thick bonnet of brown hair sits tentatively looking out at us, no arms or torso, a slash of muddled blue where her face ought to be. The shape of her head and face, the formal seated position all allude to portraiture painting of the 17th century, to Velazquez. Her chest is swathed in a blouse of quick, impatient yellow-white brushstrokes, though her neck, as pale as her face, appears to be bare, unguarded. Her only protection is what looks like the hilt of a sword in outline pointing down to her left. A sign of her strength, and yes, protection too, but also perhaps a foreshadowing of her death. There is a smoldering of heat across the canvas which attempts to obliterate the girl: striated reds, deep olives and blues nearly erase the figure or alternatively hold her captive. But in her assured stance, she is oblivious to the potent danger.

A great contrast and relief to the allegorical figures of the darker works, they allow us to breath easy once more by capturing another narrative

of Kwiatek's experience in regarding the natural world. In other words,

of simply painting nature as he sees it. If only we all had such vision!

The world would be a better place. Actually, it is a better place for his work ... ethereal, transparent skyscapes of cloud and color and ebbing depth. We fall into them gladly, and abandon ourselves to their fantastical whimsy and hallucinogenic spatial abstraction. We are at the beach, in

the sea, sky, stones, clouds, sand, sunlight. We are inside our own heads at the same time. Behind the iris of the eye, deep into the subconscious, held in a meditative state. It's as if Kwiatek has stolen a piece of the earth's atmosphere and pocketed it for his own use, revealing it to us like a shaman when we are least suspecting.

Vivian Slee is a writer who started her professional life in the art world with Jablonka Galerie in Cologne, and the Sonnabend Collection in New York. She founded and directed Princeton Project Space, a gallery for new visual works, and was the recipient of a New Jersey State Council on the Arts Fellowship in Prose. She received her

M.F.A. in writing from Columbia University, has written two novels, and is currently at work on a young adult novel. She has lived in London and the USA over the last

15 years, writing for Psycholbgies Magazine and The Bellini Project Blog. She is currently based in New Jersey where she works with Princeton University. 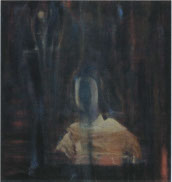 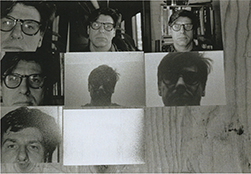 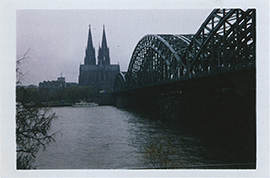 A view of Cologne

The building in St. Apern-StraBe in which Greg Kwiatek first lived when he came to Cologne 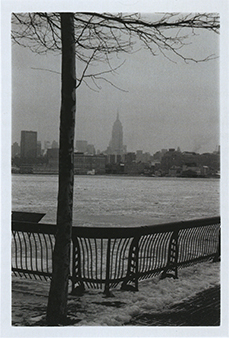 View of Manhatten from Hoboken, where Greg Kwiatek lives

All photos by Greg Kwiatek