Over three decades ago the painter Greg Kwiatek worked as a merchant sailor. That experience, coupled with several other trips across the Atlantic Ocean as a passenger on freighters, has profoundly marked his tendencies as a painter. He is not, however at least directly, a painter

of the sea. Rather his experience at sea, and more recently of being at the sea's edge, have given him access to that horizon in the continuum of painting where descriptive painting and abstraction flow into one another not unlike the sky and the sea at night. On a ship's deck at night, when the air is heavy, the sky can seem as present as a fog, though no fog is present and yet at the same time the sky carries outward into a dimmed cosmos. The Pise and fall of the swell in the darkness wash away the juncture of sea and sky so that they commingle, at times almost becoming one and, if you leave hold of yourself just a little bit, you rise or fall into a sky-sea or sea-sky. In that self-removal you wander out through vision into a domain where the gigantic intermingles with the intimate, a domain which may also be developed through painting, if one has had such experiences or can intuit them. To do so one must, like Kwiatek, have great resources as a colorist to make darks and glints of light, that are present yet semitransparent and they must never harden into mere black or whites but remain as chromatic as night at sea. One must also, like Kwiatek, have the resources of touch and command of facture to lay down these chromatic darks and lights so that they never simply sit flat to vision, hard on the canvas. Instead, they most gather, regather and flow into and out of a deep virtual space. To do such painting life changing memory is just a start. Kwiatek's way of working is so demanding of intimate awareness of both touch, color, and space that proximity to places evocative of the image is also crucial. So while the moon paintings arise in part from Kwiatek's sea journeys they are founded also from his more recent experience in Down East Maine.

For well over two decades Kwiatek has been spending time near Muscongus Bay, Maine and recently he built a house nearby and set

up a studio where he works every summer. Having myself spent

some time on Muscongus Bay, I recall something of the inky, washed darkness that I saw there in Kwiatek's moon paintings. After sunset, away from the town of Round Pound, one can easily be away from the reach of electric light. The moon, if it's out and the stars, if visible, provide what light there is. Often it's filtered through the humidity of the bay, which transforms the intimate day time scale into an uncanny hugeness, where ordinary markers of space, such as near and far, or sea and sky, overlap and envelop one another. At other times a tissue of fog may come on, the stars go, the sea and sky collapse into one another and, if the fog is not too dense the moon floats in a palpable but immeasurable reach where the sky seems lapped as though by scantily visible waves, which lacking all normal restraint, appear to conjoin with the sky. In such a floating world, the moon becomes a beacon, not marking the harbor or a shoal, but standing as steering point in the flux. In Kwiatek's moon paintings, in the world that they summon, the always present distance can seem almost at hand in the delicacy of touch just before that same delicacy telescopes the distance away into a diffuse vastness.

Michael Peglau, born 1945. B.A. Stanford University, 1967; M.A. Bryn Mawr College, 1970, Ph.D. University of Pittsburgh, 1978, M.F.A. 1983. He is a painter and a writer on art theory, on art criticism, and on painting. He has been exhibiting paintings since 1977 and has shown in New York City, in other cities in the U.S.A. and in Cologne. His works have focused for many years on harsh places and hard people in the Western U.S. and recently on such subjects near the Grand Staircase of the Escalante. 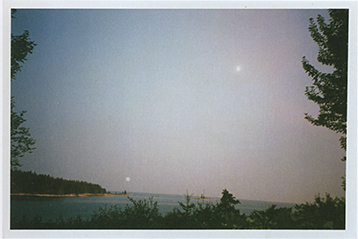