AT THE INTERFACE OF INSIDE AND OUT

Mud, the moon, and the body and perceptive consciousness of a human being are four elements which, bound in the universal relation of forms one to another, incorporate, as a series, the opposition between matter and the metaphysical which makes life for human beings a constant search for meaning. Seeking to understand our place in the cosmos and where we fit into its hierarchy, we probe nature and the universe with questions for answers which tell us about ourselves, for we are, besides possessors

of nearly god-like powers of remembrance and invention, riven by doubt. For the artist conversant through practice with the intuitive play of phenomen<;1 in nature, questioning can be charged with the urgency of an all-consuming need. For Greg Kwiatek, the painter, this questioning revolves around issues of selfhood.

Put another way, the semipermeable membrane which divides inside from out for the monadic living cell whether that cell is in itself a complete organism or is part of a larger, multicellular being (like us) provides a prospect onto all that extends beyond it. It is the portal through which exchange occurs between monad and world in what is,

in spite of this barrier, a molecular continuum. Kwiatek is a painter of

this prospect. In his work, he grapples with the metaphysical conundrum of presence, interface, and connectivity. This is reflected in the subject matter he works with, examples of which can be seen in this exhibit: the ontic ambiguity of detritus, decaying organic matter, and kelp beds,

the mud out of which life and the body arises; the mystic curtain of night pulled across one's horizon and starred with calls for union, the moon indifferent to the tides it toys with; and the haunting allegorical surrogate that is Cezanne, the false primitive who used the crudity of dogged exercise to achieve the visionary.

In the catalogue accompanying a 2008 exhibit at the David Zwirner Gallery in New York, Kwiatek identified the ambiguity of one's place between inside and out in looking at the night sky at sea. His statement provides insight into his response to life through work. "When you look out in nature and look out into a dark sky, you realize that it is not just a black sky. There is a penetration of it, and, like in painting, there are layers of consciousness that actually bring the force of nature to bear." Setting a 1975 self-portrait (not on view) in which a blase young man, his mouth gagged with a

scarf tied behind his head, looks out at the viewer with a content-less indifference to his own inability to speak against a 2012 (self) portrait

(private collection, New York) in which content and the boundary between inside and out are all b􀀘t obliterated, one appreciates the tension which continues to push Kwiatek toward resolution of an irresolvable conflict of being: to exist, molecularly, everywhere means that to be confined by the membrane of monadic presence is a state as difficult to deal with and bear as is the loss one feels trying to reach beyond one's own flesh to all one is a part in the universe only to be stopped by it.

Jeffrey Johnson is a Proust scholar (Creative Development in Marcel Proust's A la recherche du temps perdu, Peter Lang, 2012) and creative writer. His current project is a work of philosophical fiction the working title of which is Human Experiencing: Applying the Proustian Dictum Concerning Examining a Life to One's Own. By Alan Haven. 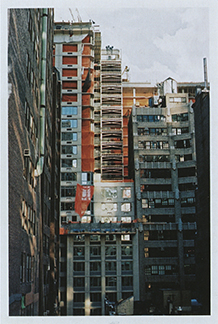 View from Greg Kwiatek's studio at The Elisabeth Foundation

All photos by Greg Kwiatek